Slide: Can the Principle of Relativity Be Generalized?

Slide: Outline of a Generalized Theory of Relativity

Slide: Casting Doubt on the General Theory of Relativity

Slide: The Completion of the Relativity Revolution

Slide: Science at the Front Line

Slide: "It is a wonderful story, that it is right."

Slide: Albert Einstein: Ether and the Theory of Relativity

Science at the Front Line 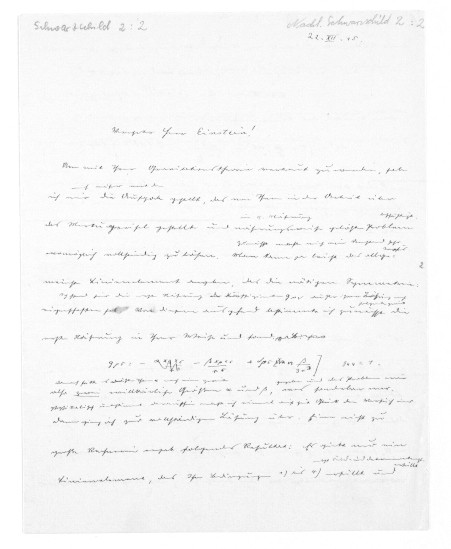 Draft for a Letter from Karl Schwarzschild to Einstein, 22 December 1915
Schwarzschild is one of the few astronomers who are interested in Einstein's General Theory of Relativity. In December 1915, he is based at the Russian front line. However he finds the opportunity to deduce the exact solution of Einstein's field equations. As you see, the war is friendly to me, he writes. Yet in spring 1916 he dies because of a war related illness. In his memorial speech Einstein bemoans the severe loss for astronomy and physics.
[ Sitemap ] [ info ] This website was created with Virtual Spaces.