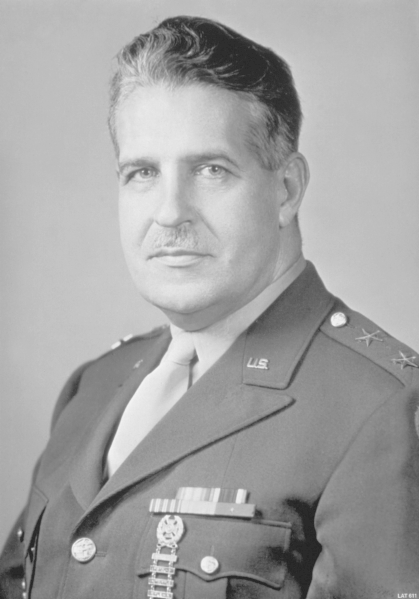 Leslie R. Groves (1896-1970), engineer, is the Brigade General who serves as military director of the Manhattan Project starting in 1942. He studies at the University of Washington and at MIT and graduates from the Military Academy at West Point in 1918. A crucial figure in the construction of the first atomic bombs, he recruits the scientists involved in the project, organizes the procurement and production of fissile material, and chooses the research facilities and testing ranges. When several members of the project, led by James Franck and Leo Szilard, try to prevent the use of the weapon shortly before the end of the war, Groves firmly overrules them and encourages the President of the United States to drop the bomb on Japan. After the war he heads an army department for “special weapons” for several years before being promoted to lieutenant general in 1948 and retiring shortly thereafter.