Slide: The Layout of the Experiment

Slide: The Execution of the Experiment

Slide: What is Polarisation?

Slide: What is Entanglement?

Slide: The Seeds of Discord from My Youth...

Slide: The Layout of the Experiment

Slide: The Execution of the Experiment

Slide: What is Polarisation?

Slide: What is Entanglement?

Slide: Einstein as a Cobbler

Slide: Sticklers for Principle and Virtuosos

Slide: Quantum Mechanics is Not the Real Mc Coy

Slide: Einstein on the 200th Anniversary of Newton's Death

Slide: The Core of the Einstein-Podolsky-Rosen Experiment 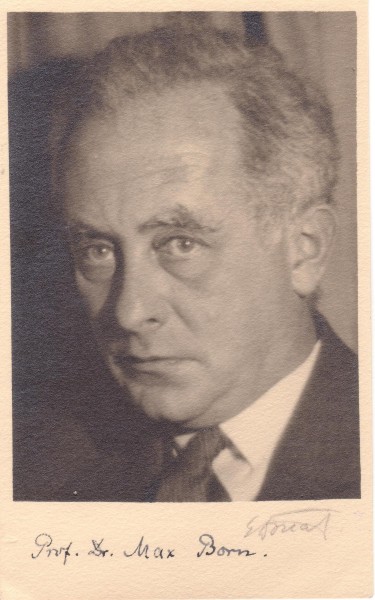 Max Born is born in Breslau (now Wroclaw, Poland) the son of an anatomy professor. He studies in Breslau, Heidelberg, Zurich and Göttingen, where he receives his doctorate in 1906. After further stations in Cambridge, Breslau and Göttingen, he receives a professorship at the Berlin University in 1914 where he becomes friends with Einstein. Born is appointed ordinary professor for theoretical physics in Göttingen in 1920. He plays a primary role in Göttingen becoming one of the centers for fundamental work on the creation and use of quantum mechanics. In 1926 he formulates quantum mechanical statistical analysis, for which Born will receive the Nobel Prize much later, in 1954. Born is forced to emigrate in 1933 due to his Jewish heritage. He receives a professorship in 1936 in Edinburgh and, after his retirement in 1953 returns to Germany. In his final years, he is active proponent of peace and disarmament.
[ Sitemap ] [ info ] This website was created with Virtual Spaces.