Sequence: our own BH

Slide: Movement of Stars in the Milky Way Centre

Slide: Kepler Ellipses around Sagittarius A*

Slide: S2, a Star in Narrow Orbit Around the Black Hole

Slide: S2 in its Orbit

Slide: Flares From Sagittarius A*

Slide: The Speckle Camera SHARP I

Slide: Optical System of SHARP I

Slide: Where is XMM-Newton now?

Slide: Geminga as a Magnet

Slide: J. A. Wheeler: The Inventor of the Name "Black Hole" 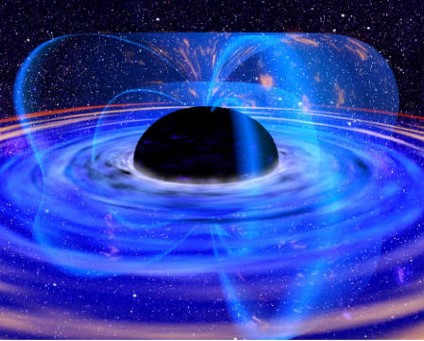 Spectacular - but no longer speculative

Black Holes presumably are the most spectacular objects, whose existence and properties are consequences of General Relativity. They constitute a region, in which space and time are distortet in such a way that matter and light after having passed a certain horizon are confined forever.

The possible existence of Black Holes was predicted by K. Schwarzschild as early as 1916. However up to the sixties it remained controversial whether physical conditions exist for allowing Black Holes in our universe. Since then advances in astrophysical observation methods and theoretical developments in General Relativity consolidated the physics of Black Holes, confirmed by astounding observations.

Astrophysics today essential deals with two variants of Black Holes. Stellar Black Holes - in a mass range of several solar masses - are the final state of massive stars which burn out with a supernova explosion. Supermassive Black Holes with more than a million solar masses were meanwhile identified in the center of our galaxy and in various other galaxies. The energy set free by matter attracted and swallowed into such a Black Hole is presumably due to the most energetic astrophysical phenomena like the jet-like eruptions of radio galaxies.