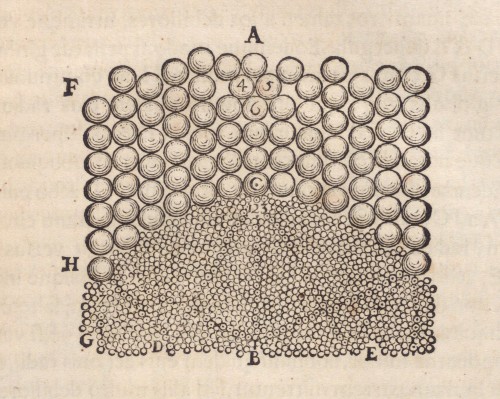 According to Descartes (1596-1650), light propagates without any time lag through a solid medium, which fills the whole of space. The propagation of light is a direct mechanical transmission of motion. Descartes thinks that the medium through which light propagates consists of matter that is composed of particles of different sizes, which are only defined by their extension. The medium is not elastic and cannot be compressed. Its existence cannot be proven. According to Descartes’ third law, which describes the motion of particles of matter, all moving bodies strive to move in a straight line. However, as it is not possible to move in a straight line in space that is completely filled, the particles take on circular movements. As a result of this process, space is full of vortices, which carry the celestial bodies around their orbits. There are three kinds of particle. The smallest form the stars, because their circular motion drives them toward the central point of the vortex. Because the smallest particles are moving through filled space, they continually press up against neighboring particles. Light is simply this pressure. Light propagates in straight lines because, unlike particles of matter, it can obey Descartes’ third law, which prescribes a tendency to move in straight lines.