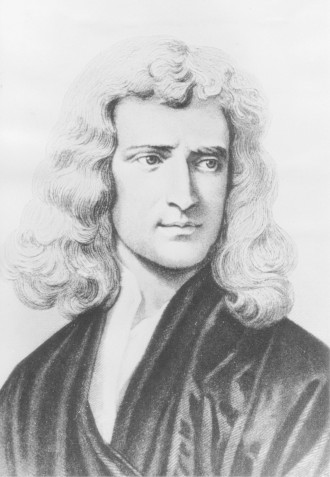 Newton sees light as a stream of particles that is emitted by a light source and travels at a finite speed in a straight line. The particles are of different sizes; the largest ones, when they strike the eye‘s retina, produce a red color sensation, whereas with decreasing size the smaller ones produce sensations of orange, yellow, green, and blue. White light is composed of rays with different sized particles. Newton‘s arguments in favor of his theory of light are based on his experiments in which a ray of white sunlight passes through a prism and disperses into the colors of the spectrum. With his corpuscular theory of light he attempts to explain phenomena that we understand today on the basis of the idea of light as a wave. These include the diffraction of light, when light appears to be deflected from the edges of solid bodies, and interference, the pattern of light and dark areas produced when light from two sources overlaps. Newton speculates about an interpretation of diffraction as deflection of the particle stream due to an attractive force between edge of body and light particles. However, he does not find any satisfactory explanation for the phenomenon of interference. On the basis of Newton‘s corpuscular theory of light, his successors calculate the bending of a ray of light that passes the Sun and is modified by its gravity. The value calculated is half of the one calculated with Einstein‘s General Theory of Relativity, which is confirmed by observations.
[ Sitemap ] [ info ] This website was created with Virtual Spaces.