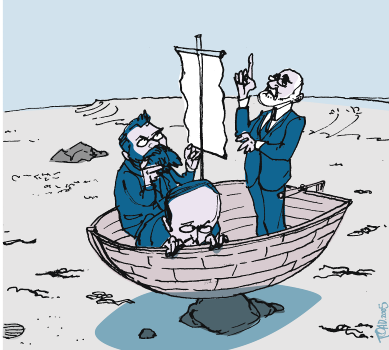 Oh really, my dear Planck, you see everything purely from the point of view of thermodynamics. You have two principles: the conservation of energy and the increase of entropy, and that’s all there is to it, your physics. A bit unexciting don’t you think? In my school we have more fun. You’d certainly learn something there, for instance that entropy, seen from the point of view of mechanics, is a measure of the disorder of atoms and molecules. And this disorder increases for statistical reasons, as I observe daily by the state of my desk.

But what happens when you let time run backwards? Then your disorder will decrease again. And according to the laws of mechanics such a reversal should be possible, but not according to the laws of thermodynamics. So you see that these are not attributable to mechanics. My tendency is to place my hopes rather in a combination of thermodynamics and electrodynamics. Radiation in a state of thermal equilibrium, a borderline problem in the theory of heat and electromagnetism, that could lead to a keystone in classical physics!