Slide: The War of Minds

Slide: Einstein and the Appeal to the Europeans

Slide: Einstein as an Outsider in the War

Slide: Physics and Chauvinism in World War I

Slide: Einstein Gets Involved in the Bund Neues Vaterland

Slide: Postcard from Einstein to his Mother

Slide: Einstein’s Stance on Destitution in Germany after World War I

Slide: The War of Minds

Slide: Einstein and the Appeal to the Europeans

Slide: Appeal to the Europeans

Slide: Einstein as an Outsider in the War

Slide: My Opinion on the War (Excerpts)

Slide: Physics and Chauvinism in World War I

Slide: Einstein’s Stance on Destitution in Germany after World War I 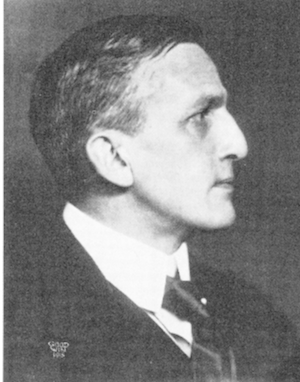 The physician Georg Friedrich Nicolai (1874-1964) comes from a middle-class Berlin Jewish family, but is baptized a Lutheran. He studies in Königsberg, Berlin, Paris, and Heidelberg and gains his doctorate in Leipzig in 1901. After that he works as a ships doctor for one year and is then an assistant in physiology in Halle, Berlin, Leyden, and St. Petersburg. He habilitates in 1907 and in 1909 becomes full professor and assistant medical director at the Second Medical Clinic of the Charité Hospital in Berlin. In 1910, together with his superior Friedrich Kraus, he publishes a fundamental textbook of electrocardiography. He is one of the physicians to the empress. From the outbreak of the World War I he works in a military hospital.

Nicolai condemns the war and is committed to a European cultural community. In October 1914 he writes the Appeal to the Europeans in response to the pamphlet To the Civilized World! Apart from Einstein the only other signatories he is able to acquire are the astronomer Wilhelm Foerster and the private scholar Otto Buek. He speeks out against the war in lectures and publishes the anti-war book The Biology of War in 1917. These activities bring him a court-martial and demotion in rank.

After the war he is prevented from resuming his teaching duties at the Charité, and in 1920 the university revokes his permission to lecture. For this reason he emigrates to Argentina in 1922, where he is welcomed as a great European. In 1936 he is appointed professor of physiology at the College of Veterinary Medicine in Santiago de Chile.